ABDULKAREEM KASID AT THE BRITISH LIBRARY

To the BL last week, to record, alongside his reading in Arabic, some of the English versions of the London-based Iraqi poet's poems that I've been making with him over the last two or three years. He's on my right. The Punjabi poet Amarjit Chandan, who conducted the interview with Kareem accompanying the reading, is on my left. The photo was taken by curator Stephen Cleary.

The series is 'Between Two Worlds: Poetry and Translation'. It is an  audio recording project conducted by the  Library in collaboration with Amarjit Chandan. The aim is to to record for posterity a wide range of poets who are bilingual or have English as a second language, or who otherwise reflect the project's theme of dual cultures. Most of the poets selected have migrated to the UK from the countries in which they were born.

The format is a reading of a selection of poems followed by an interview on the personal experiences and situations that may have influenced the poet's creative work. There over thirty poets recorded so far. You can listen to the readings on the Library's website. Abdulkareem Kasid's recording should be there soon.
Posted by John Welch at 13:03 No comments: 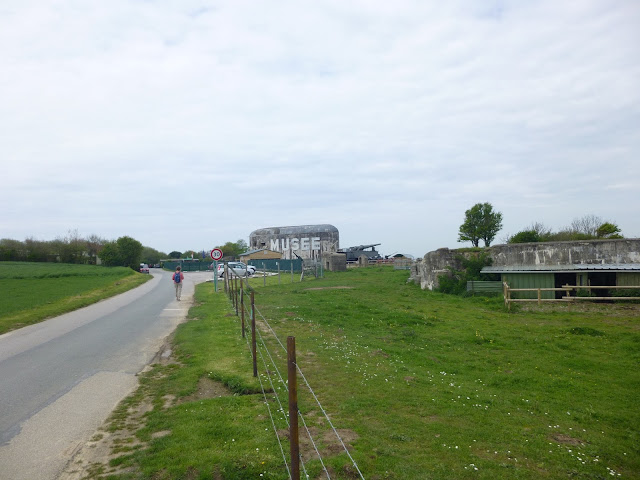 Museum as fortress? Something for the heritage industry? It's about ten miles from Calais and near where we had a family holiday three weeks ago, in an area thick with Second World War memorabilia. Mr Todt was chief architect of the German motorway system in the 1930s. He was employed to design this massive gun emplacement, to house a gun pointing directly towards Dover. And now it's private museum, the work of an individual enthusiast. It's an enormous space inside, with lots of weapons and some puzzling signage: 'The funboards are specific to this site . . .' In one glass case there's an RAF string vest as issued apparently to all pilots, the idea being that when you were taken prisoner you unravelled your vest and used it as a rope to climb down from your cell. Can this really be right?
Posted by John Welch at 11:34 No comments:

‘THE PALACE IS VAGUE AND DELICIOUS’

Going through old files on my computer I came across this. I've long been preoccupied with Domenicino's Frescoes for the Aldobrandini Villa, many of which are in the National Gallery (where, when I last enquired, they could only be seen on Wednesday afternoons and not always then). The scenes are depicted as if on tapestry hangings and the most famous shows a burly, dwarf staring out at the spectator holding his manacled wrists in front of him. Researching them took me to an Italian site. I clicked on Translate and this came up. . .

Algid mount, under which form a small lake near the Latin way, called the Lago of the Quarry, or the Size of Rocca Priora. Reached the villa Lookout, servants for the giuochi of water, than ivi in great number make themselves, which were perfect to you from Orazio Olivieri di Tivoli, Engineer of the villa of Este. The palace is vague, and delicious much its situation, than ago to give the name of Lookout.

Four but of these facts more do not exist, being be it saws to you, and it transports to you in Rome, these are three the by hand skillful one in entering, and that one on the door. In bottom a rappresentazione of the mount is looked at Parnassus in relief, on which they are Apollo, and the MUSE, ciascuna di.le which sound a istromento for the force of tlie water, and forms with a music concert.
In the same palace then veggono ne' express ceilings several facts of the Writing, paintings to coolness, do not give the Domenichino, as it is grossly expected; but from the Knight of Arpino, and quantunque, according to the usual, works of a corrected design cannot dirsi, also deserve of being seen, being of the best ones than that artist.
In the following room Davidde is represented, that the Golia Giant kills; and finally in the last room Giuditta observes itself continuation from its slave, than door the head of Oloferne. The figure of Giuditta is of one amazing beauty. As far as the merit, like garden, it is on the taste of the other villas of Italy; but the delicious situation, in which it is found, very influences not to remain displeased seeing the trees cuts to you in several shapes on purpose.