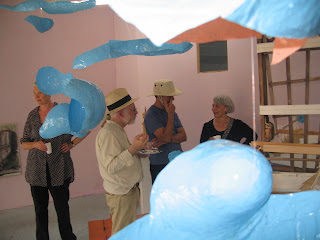 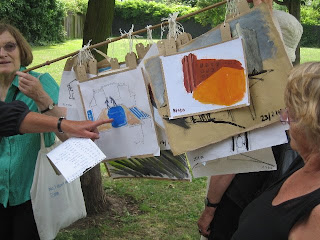 Amanda Welch is showing her ‘Hackney Downs’ project in a studio generously lent to her by fellow-artist Souheil Sleiman for the week. It’s on for the rest of this week and here you can see some of the work being transported across the Downs - it will close with an event taking place on Saturday 11th July at 2pm to round it off, when some of the work will be transported by a band of willing helpers across the Downs and back to our house at 15 Norcott Road. Meanwhile she’ll be at the studio from 4-6 each day till then, or at other times by appointment. Call 020 8806 5723 for further details.

‘My current work’, she writes, ‘comes out of an activity, begun “on the side” in 2005, of making memory drawings.’ These are memories of cycling across Hackney Downs ‘on my way to somewhere else. It had occurred to me that these repeated incidental crossings were important’ and later in the same piece she says: ‘Paradoxically, to have no purpose became a purpose. There were conditions attached. From the start it felt important to stick to the moment of noticing – no stopping my bike to check, no going back, no filling in the missing bits, no analysis, no system; no looking for, only finding.’

Hackney Downs: the space is an ambiguous one, not quite the traditional idea of a park. It doesn’t have the curves and irregular planting of trees one associates with parkland as a manicured version of a traditional rural landscape. It’s something squarer and more abrupt, though not completely flat but rising in the centre in a irregular shallow dome and tucked in alongside the railway, formerly the line of the Hackney Brook. There are straight lines of trees on two sides, and an open space you venture into from the safety of the edge – though it has recently been somewhat softened with the planting of a ‘community orchard’ and a ‘wildlife area’.

Martha Kapos wrote of Amanda Welch’s previous cycle of work, the ‘Devon Paintings’: ‘What if you wanted a kind of painting truer to the painter’s walking eye, a painting closer to the experience of landscape as we actually enter it and circulate within it? What if you wanted all of these images and shapes together within the same surface, within the same pictorial whole?’ But moving through a city is all glimpses; a city is a solid thing, an image of permanence, but is composed for much of the time of these glimpses. Here they relate to a single, albeit various, space, and a crossing and recrossing rather than a passing through. Somewhere behind it there’s the plein air tradition of landscape painting in watercolour. Amanda Welch did a lot of paintings in this vein around twenty years ago. An aspect of this kind of work has always been a topographical recording. As in, for instance, the four volumes of Recording Britain published immediately after the Second World War, and the last major undertaking of its kind? The project was launched in 1939 in these words: ‘Artists should be invited to make a number of topographical water-colour drawings of places and buildings of characteristic national interest, particularly those exposed to the dangers of destruction by the operations of war.’ But where each plate in Recording Britain aims to represent a gathering together, a distillation of the essence of a building or landscape, in this work it is all fragments. It has been disassembled, flying apart in pieces. (There have been literal explosions. There is only one remaining towerblock, recorded in three of the ‘sculptures’, the other blocks having been blown up by the Council in front of a large audience of spectators.)
But these works have been made emphatically not by sitting in front of the landscape, but always done from memory. There is a preoccupation with time passing, recording all kinds of often very small changes and, from time to time, recording the site’s earlier history.

There are elements of the cartoon which recall Amanda’s earlier career as an illustrator, and emerge especially in the protagonist who moves through the work, a puzzled and not infrequently indignant person on a bicycle in a hurry to get somewhere else. ‘I really hate these new seats’ she declares. It’s the opposite of the painter who has set up an easel in front of a landscape and works meditatively for a prolonged period.

These fragments have to be somehow organised. Archiving is a contemporary preoccupation – but here, whether or not consciously, there are elements of parody. The process of making these objects is itself directed by impulse, using whatever materials happen to turn up. Many of the drawings as well are on scrap paper; she refers to them as ‘residues of my bicycle trips’. It’s the opposite of the reverential white-gloved approach. There is also a steadfast avoidance of the kind of neatness often associated with this kind of thing – which tends to involve work all executed on paper of exactly the same size, providing the pleasure of making a ‘set’ – like collecting stamps and sticking them in one’s album. The works was conceived in part as a way of moving on from the previous series of paintings. Looking at these drawings in bulk what is so striking is the is enlivening variousness of the result.
Posted by John Welch at 14:35 No comments: