A message from Chris Gutkind to say that the London-based American poet Al Celestine has died. Chris wrote ‘Al has died, it's sad. He had a heart attack a few weeks back, I just found out from his very distressed boyfriend of 21 years, poor Al, such a warm man, and a wonderful mad man, and such an interesting poet, never seen anything quite like his work. He died July 28 . . .’

I published Al’s pamphlet 'Confessions of Nat Turner' in 1978 just three years after I’d started The Many Press. At that time I was printing things myself at the Poetry Society print shop in Earls Court. Production-wise this one could be criticised. The cover card (I had the covers printed elsewhere and bound the pamphlets myself) was a rather alarming dark pink. I had a Dover Book of Aztec motifs – all too easy to chop up and paste down and I went a bit wild with those.

Al was very straightforward to deal with, but quite elusive, I found, on a personal level. I have a file for each Many Press publication, where I keep letters and suchlike as well as the actual ms. But in his file all there is is the original typescript and the brief covering letter. I remember he was anxious not to be labelled a ‘Black poet’ and got quite agitated when he saw a brief review in Time Out drawing attention to that. ‘Who told them I was Black?’ he asked (I think it may have been me). At the time he was working at Joe Allen’s, a smart upmarket burger place while taking some part in the London poetry scene – I recall him standing beside me in the Poetry Society print shop and saying, in a rather resigned way, that he had to head off to Poetry Round.

There were a few other fleeting contacts. There was a group vegetarian dinner he was involved in organising – fund-raising? Amanda and I went along to that. And there were one or two brief telephone and later email exchanges and very occasionally hearing word of him which suggested he was still around now and then on the poetry scene.

What else did he publish? Something that strikes me now, re-reading the 'Confessions', is the combination of powerful rhetoric and a kind of steadiness of control. Here are a couple of passages:


Jacob strums
It's doing what must be done
And keeping up appearances
To become a part of what is.

The stars are hysterical with green omens.
The wide water parts, and he slips
Further and further down into perfection

Because song is naked, and terror
Because it's orgasmic, because it's rooted
Spreads deep into our bowels and cannot be sung.

It does not have a name, this tune.
We have nothing to cleanse our wound

When a string breaks with its own song.

He sees pilgrims, horrific puritans,
Lost, like a crow flying beyond its own field.

Doubt ripens.
Doubt sleeps in the mouth of rivers.
It has the colour of mustard greens.
It has, of course, two sides;
They sway within us like complaint.

Who wants to translate suffering, and who
Weeps for your old juju man now?

Here among hot ash each generation
Like smoke searching for its gone fire
Rises to tell us what we want.

The narrow gate closed.
The yard filled with enraged masters.

Dead Eye harbored horizons.
His face loomed in the half-moon.

There wer rumors of owls.
There were pockets of blood.

Red cauldron of ignorance boils
Over with screams.

The crows was like small white teeth. Standing there
Digesting their own sins

They spoke of refusals,
The necessity of remaining pure.

The past was a bull's eye:
The beginning, the end.

They heard something approach and stop.
The tar smiled, the feathers snickered.

Dead Eye stood still.
He cut from each defeat a thread.

He emerged
A black phoenix 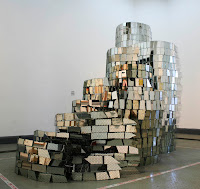 It was Souheil Sleiman, a friend and near neighbour, who made his studio available for Amanda's Hackney Downs event. I’m currently correcting the proofs of my Shearsman book 'Visiting Exile', due out in October. Souheil’s sculpture ‘All Dressed Up and Nowhere to Go’, seen here on the right, will be on the cover and references to it recur throughout the book. ('All Dressed Up...' was the subject of my first post on this blog.) The work featured as Lebanon’s entry for the Alexandria Biennale last year, so the whole thing had to be dismantled and reassembled, which is referred to in the following section:

Alexandria: is it
Towards a city
But defunct – that can
Swim or sprout eyes

Library lighthouse drowned statues
On the balcony, stands there, a stranger
The name is lips kissing themselves

Where the sculpture arrives
In its packing case

A thing of endless corners
Look backward the usual stranger

And a voice, that might last in the calling
From ‘somewhere out of Africa’

Smashed to a dazzle – my animal mouth
Being walked here into a mirror’s silence
Posted by John Welch at 03:00 No comments: 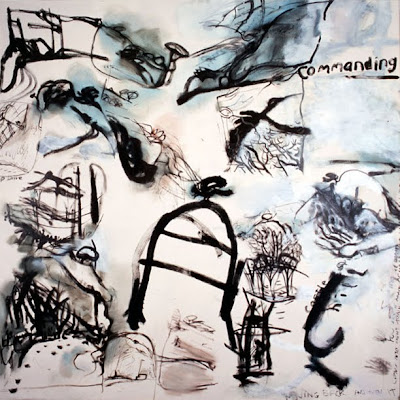 Amanda Welch’s website is now up and running, at http://www.amandajanewelch.com/. My last post had Laurie Duggan’s photos of Amanda’s recent ‘Hackney Downs’ show. On her new website you can read more about it, and her statement on the project. And there's a piece by poet and critic Martha Kapos on her last series, the Devon Paintings as well as lots of images of previous work.