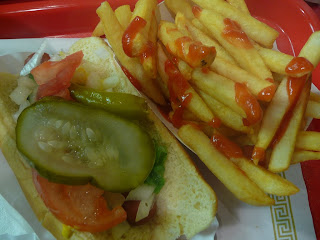 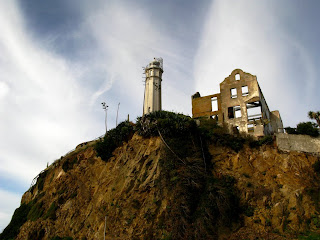 My daughter and her boyfriend have been travelling around the USA for 3 months. See photography from their trip (and more) at their Flickr site: www.flickr.com/bearandtoadphotography

'Ultimate Americans', just published by the University of Alaska Press, is the third of Tom Lowenstein’s trilogy of books on the Inuit of Alaska. What is so special about his work as an anthropologist and historian of contact is the way that, alongside this scholarship, he has sought to reconstitute, in a series of powerful (and sometimes very funny) poems, the hunter-gatherer way of life, the palaeolithic if you like, from some of its last surviving remnants. Thus in 'Ancient Land: Sacred Whale' (Bloomsbury 1993) the prose narrative is interspersed with long stretches of poetry evoking the traditional whale hunt and its rituals. It's a remarkable enterprise and his book got some excellent reviews when it came out - but it seems a pity that few in the poetry world appear to have acknowledged it. In 2007 Shearsman published 'Ancestors and Species' with more longish narratives on the same themes.

'Primitive' peoples - and the rituals of shamanism in particular - can all too easily be subjected to a sentimental poeticising, a shortcut to exalted or visionary experience. Lowenstein's work is informed with humanity and firsthand knowledge, and avoids idealising his subject. 'Ultimate Americans' is a work of historical scholarship focussing on one community at Point Hope in Alaska and the effects of contact with commercial whale hunters, traders and missionaries, one missionary in particular, a man called Driggs. Here's a short extract from the opening chapter:

Surrounding the camp lay a mass of equipment: skin boats, kayaks, harpoons, fish nets, coils of sturdy seal skin rope, and a clutter of little tools for the making and mending of yet more equipment. Awaiting transformation into boots and parkas, bedding and boat skins, lay seal, caribou and walrus skins. Sea mammal carcases – fresh, half-butchered, some half putrid – lay among skeletal remains from past seasons’ hunts. Higher on the bluff rose driftwood racks where the women had draped meat they had sliced thinly to dry in the wind that had scarcely stopped blowing since the last Ice Age. Hunting, cutting, drying and preserving were a daily labour. Bags made from hollowed-out seal stood by the tents filled with dried meat, eggs, birds steeped in seal oil, or blueberries and meat chips packed in caribou back-fat. Tethered securely away from this larder, were the dogs that had dragged the skin boats along the inshore water from the village. And all this work and clutter was framed by heaps of grey, weathered tree trunks: spruce, birch and cottonwood from the southern rivers which had drifted up coast and which the sea had been disgorging here for innumerable centuries.

On an August day like this the work of hunting and accumulation was mixed with hours of lazy enjoyment. The temperature hovered between forty and fifty degrees Fahrenheit. For Tikigaq people, who experienced winter temperatures of minus thirty (and far lower given wind-chill), this was warm. The children ran bare-foot, the little ones naked. Adults shed one layer of their double caribou skin parkas and trousers. ‘Silagiiksuq’ (beautiful weather!)’, people would murmur. Such days sunshine and a light south wind would soon be replaced by violent equinoctial storms and then freeze-up in November.

When activity came it was often sudden. The nets stretching from the beach would stand empty for days. When belugas arrived, the thick skin mesh would thrash violently with struggling white dolphin-like whales. When the wind changed direction, the men might take off inland to hunt caribou, returning with back packs of meat and skins, repeating their journey to fetch what they had left and to visit the traps they had left for foxes and marmots.

Things also happened for people simply to observe. Grizzlies ambled from the ridges where they’d been browsing for berries and excavating squirrel burrows to scavenge for dead seals or walrus. A grey whale, not worth chasing for its meagre coat of blubber, would swim into view in the middle distance. Or an orca would cruise inshore to attack a seal. The women would laugh, throw stones and shout, ‘When you have eaten, bring us a share!’ What came round the cliffs habitually belonged to a world that was known and which could be interpreted. The animals were always welcome. But people from beyond were often dangerous . . .
Posted by John Welch at 08:52 No comments:

The current issue of Poetry London carries my review of ‘The Bloodaxe Book Of Contemporary Indian Poets’ edited by Jeet Thayil. Here are more than seventy poets who write in English and all likely to be unread by most poetry readers in this country. As well as from India there are poets here from Britain, Fiji, Guyana, America, poets of mixed heritage born in India, in the UK or USA, members of minority groups in India such as Jews and Parsis, while the editor was born into India’s Syrian Christian community. There is a large representation of women writers. A question begged by this anthology of course is what is ‘Indian’? Arundhathi Subramaniam has a poem titled ‘To the Welsh Critic Who Doesn’t Find Me Identifiably Indian’ – a pre-emptive riposte perhaps to William Radice’s review of the book in the Guardian where he criticised the work as 'not sounding Indian enough' - this at least was how Jeet Thayil summarised Radice's review when hitting back in the paper’s Response column. Thayil accused Radice of an ‘orientalising’ tendency. In her poem ‘Home’ Arundhathi Subramaniam writes:

Give me a home
that isn’t mine,
where I can slip in and out of rooms
without a trace . . .

A home that I can wear lightly.

Arun Kolatkar is a poet who writes in both Marathi and English. His best-known work, the sequence ‘Jejuri’ is an exemplary text in the way it pays a kind of wary, disenchanted respect to a depleted tradition of pilgrimage. In the review I quote from his ‘Pi-dog’, whose canine protagonist, in a sideways acknowledgement of the British legacy, claims descent ‘matrilineally’ from ‘one of thirty foxhounds’ imported from England

of introducing fox-hunting to Bombay.
Just the sort of thing
he felt the city badly needed.

I got involved in this area way back in the early 1980s as part of the whole multicultural project. I helped run The South Asian Literature Society, founded by teacher and critic Ranjana Ash. The idea was to spread knowledge of South Asian writing to a wider audience. In the event SALS events only really attracted an Asian audience. But I certainly became aware of just how much stuff there is, available in English, that never finds its way over here (a lot of writing in different South Asian languages gets translated into English for the benefit of Indian readers). There’s a tendency to pride ourselves on our receptivity in this area. In fact it’s an uneasy relationship characterised by multiple silences and omissions.
Posted by John Welch at 03:54 No comments:

Just back from breezy Hunstanton in North Norfolk where I was staying with Peter Hughes, and took the opportunity to record an interview. I’m currently doing a series of these with people I used to publish with The Many Press and who have not, as far as I’m aware, been interviewed before. The un- or at least the under-interviewed. . . I’ve already more or less completed one with Bill (publishes as W.G.) Shepherd, whose point of departure is his father setting off for the First World War aged sixteen (he’d lied, as so many did, about his age) on a horse and armed with a sword. . . The repercussions of this are a significant theme in our ensuing conversation.

Peter gave me the latest in his Oystercatcher series, The Deer Path to my Door by Gerry Loose. This is a series or sequence of two line poems, work that, to quote from the Oystercatcher site, 'leads language through its own moving landscapes, as well as others trodden, tended and observed by the author. Wry, lyrical, daft, philosophical – these lines are alert to miniscule shifts in natural phenomena and thought, the tracks of language glistening under starlight, sun and ample Scottish rain . . .' It’s a tricky thing, the very short poem. It can all too easily acquire a tendentious significance precisely because of its shortness – those shards of agonised experience written by Ian Hamilton, and by others published by him in The Review some years ago, fall into this category for me; something enormous is left hanging in the air, but after a while you can’t help thinking, well so what. Gerry Loose does work for me, less portentous, and offering moments of real illumination.
Posted by John Welch at 11:49 No comments: