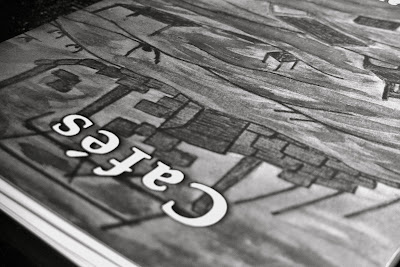 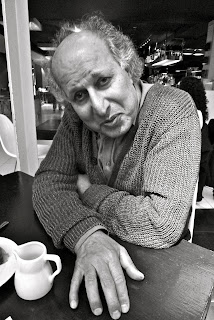 A new Many Press publication, the first for ten years, this is the first extensive publication of London-based Iraqi poet Abdulkareem Kasid’s work in English . . . Well-known in the Arab world as a poet, essayist and translator – in total he has published around forty books – he was born in Basra in 1946. It was in 1978 that he left Iraq and fled to Kuwait. To avoid being found and sent back he left Kuwait for Yemen, where he settled in Aden and worked as an editor of the New Yemeni Culture magazine. He was living close to the house in which Rimbaud lived – appropriately enough, as he has translated Rimbaud into Arabic. Between 1980 and 1990 he lived and worked in Damascus.

There are different poetic worlds in London that scarcely overlap and this seems a pity. In my introduction to Cafés I’ve written: Abdulkareem Kasid is part of that Arab diaspora which carries on a rich and varied cultural life in this country but which only sporadically comes into more general view. A collection by another London-based Iraqi exiled in London, Songs of the Tired Guard by Buland al-Haidari, appeared way back in 1977. It was translated by Abdullah al-Udhari, who published it with his own TR Press. Al-Haidari died in 1995. Still resident in London is Saadi Youssef, whose selected poems Without an Alphabet Without a Face, translated by Khaled Mattawa, appeared from the American publisher Graywolf Press in 2002

The café as a site of sociability and meeting place for writers . . .  It features significantly in the work of Fawzi Karim, another London-based Iraqi poet, whose collection Plague Lands appeared last year from Carcanet, in versions by Anthony Howell and Abbas Khadim.

Cafés has two poem sequences. In the title poem the short sections have, paradoxically in view of the underlying subject matter, a certain lightness of touch, but always edged with darkness.  ‘Windows’ treats its themes of oppression, nostalgia and flight in a manner that is oblique and enigmatic.

Translating poetry nowadays is often a collaborative affair. The title sequence was first translated into French by Kader Rabia. I made an English version of the French which was then worked on in close consultation with the poet. The sequence ‘Windows’ was translated by the poet working with his daughter Sara Halub and this version was then worked on by David Kuhrt, again in close collaboration with the poet.

Cafés is available for £3.50 and if you’re interested in a copy you can contact me at
johnhopewelch AT yahoo.com

A café near the bridge –
At daybreak
The boats call there.
They wait and wait
Then set off again, empty
Moving without oars
So where could those boats be going?

A café, when I was a child
And all I can remember
Is a white fox fur
Hanging there when you went in.
Eyes closed it had a child’s face,
And shadows blown this way and that by the wind –
A café which, no doubt, existed
Only in my dream

The boat, that cast anchor
In the river, alongside the market,
It’s no longer a boat
Since summer surprised it with whiteness
And the chairs were lined up on its deck
And the passers-by came on board
No longer waiting
For its siren to sound.

Open in summer,
closed in winter.
In autumn
I don’t know
why I close them
or open them,
in spring
I don’t remember
what I should do.

Once I carried my luggage
And walked away
followed by windows.

What windows are those
smelling of vinegar
and my mother’s fragrance!

In the desert there is a window.
Why has no-one seen it
but me?

There,
on a distant path,
in mountains that are merely memory
where waters run vaguely,
one small window
looks out.

This man
carries his window with him
as he walks